It is often said that the road less traveled in any journey might be the hardest, the most diverse and at times perhaps a bit more fun as well.

Sometimes this can prove to be true in our entertainment choices as too, as a band in the music biz who take a risk on a new musical direction may be loved or hated for such a choice or an actor might be a hit in a drama after years of doing comedy.

It is a fact then of sorts that the art of  daring to be different makes an impact, be it positive or negative...

Doctor Who is no stranger to the road less traveled, at it's very core the concept of the Tardis and the nature of the Doctor's biological attributes sets it apart from most other shows in the genre of science fiction.

It's main plot device of travel anywhere in time and  space also gives the opportunity to explore other less traveled paths in storytelling, sometimes with mixed results.

Most would say that Time-Flight was one such direction of the negative variety, a story many call disjointed, full of plot holes and some very awful special effects and sets. They will tell you that at the end of the brilliant season nineteen was one of the worst Doctor Who episodes of the Peter Davison era if not the eighties.

If you can discuss it with a fellow Doctor Who fan without someone mentioning how crap the Plasmatons look or someone asking why the Master was disguised as an Arabian wizard with bad skin then your conversation was an aberration, not the norm. 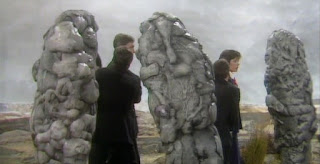 But in between all the turbulence Time-Flight was not the fiery crash some would make it out to be.

It did indeed have it's bad moments and head scratching plot elements, but it also made excellent use of location shooting and management with securing permission to film at Heathrow and on board Concorde, a fun, enjoyable end to a season that had delighted and shocked us with a tale about a plane hijacking slightly outside the kind we are used to.

I suppose it also rates a bit more highly with me then with others due to a healthy dose of nostalgia. I first saw this when I was probably about five years old or so, and back then Doctor Who was fun and entertaining no matter what plot hole or wobbly set turned up.

This means that I am admittedly still looking at Time-Flight through young eyes, but I don't think the Doctor himself would have any problem with that, kids always see a bit clearer than adults anyway, and I would also have the imagination and mind set of the demographic this series has always held so dear.

Openings are of course always an important aspect to consider and what could be better then a he luxury jet just vanishing from the blue skies it occupied just a moment ago.

You are drawn in, wanting to know how in the world that could have happened. It was a simple effect, the same one the Tardis had been using since 1963, but it looked so odd and extraordinary to see a plane just vanish into thin air.

The concept of a plane or other mode of transport such as a train taken over is certainly not unique but it was relevant at the time, when  real flights were hijacked with real people on board, giving an added sense of weight to the proceedings.

Another positive that soon becomes apparent is that this is a direct continuation from the previous story, Earthshock, where former Tardis crew member Adric had died trying to battle the Cybermen.

This was handled tremendously with a great little scene about how the Tardis' time travel ability could never be used to change events such as Adric's death, an idea that had relevance to series continuity that was modernly relevant as recently as Waters of Mars in 2009.

Continuity was big to the first couple seasons of John Nathan Turner's run as producer of Doctor Who and at times it worked to perfection like the humorous irony of the Tardis ending up at Heathrow Airport while trying to reach the Great Exhibition, as Heathrow was a destination the Tardis had been trying to reach almost the entire season without any success. 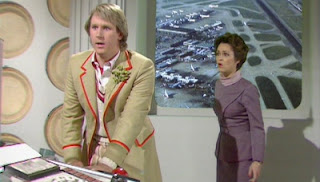 Supporting characters were well done this time around too, with the skepticism of the Concorde crew about the Doctor's sanity and credibility and Professor Hayter being the ultimate non believer and stubborn Human.

The roles are cliché to be sure and done more than a few times in Doctor Who's long run, but it also is cliché in that special way the programme has of doing what it does best. It just is because it's Doctor Who and that is what happens. People doubt the Doctor until it is proven to them that he is being completely serious and it is in their best interest to put trust in him.

Much like the Daleks never just shooting the Doctor a few hundred times and just kill him dead, the Doctor facing dumb founded and negative locals has always been a part of the show that was both silly and serious at the same time.

What is nonsensical is why in the universe the Master would feel the need to play dress up as Kalid but let's be honest here, the Master has a habit of pretty strange behavior and I think we could all dream up a numerous amount of possibilities as to why he is in disguise, other then to serve as a decent cliffhanger to episode two.

But the good bit about this is the confrontation between the pair while the Master is still in disguise. This is actually in my mind one of Davison's better confrontations, it should not be ignored due to the story it happens to be in is not very popular, and certainly Time-flight is a stronger adventure for having the scene.

Turning back to the nostalgia angle  reminds me that I also loved this story for the amount of scenes filmed in the Tardis and all the various take offs and landings form both the Doctor's and the Master's machines. The Master even put his chameleon circuit to  use as well, adding to the Tardis fest we are served up in this story.

At the time I loved any glimpse of Tardis I could get from the William Hartnell era to Davison and I even made cassette tapes of the various Tardis sounds to use when I built my own 'Tardis Console' on our kitchen table out of old Atari keyboards and various things with buttons, switches and levers.
Time-Flight was a great source for these sound effects and for big long glimpses of the console room, which at the time used to be my favorite part of the show not involving Daleks or Cybermen or the Doctor arguing with Tegan.

It is this kind of warm fuzzy feeling that Time-Flight brings to me, despite not being a flawless script or concept.

Fitting a whole race of people into a tiny sarcophagus was of course pretty interesting at the time too, as was the fact that such a race would war within itself between the good and the evil, it's odd look at  the never ending battle between the whit and the black, the dark and the light making it a strong point for the episode that was not explored as much as it should have been, the Doctor and the Master being perfect mirrors for the black and white Xeraphin.

The themes in this episode were actually pretty solid and in your face, but something fell apart along the way that made Time-Flight shine a bit less then it could have.

It is however no reason to call this one the worst of all time, especially today after Delta and The Bannermen and Fear Her were broadcast in the many years that followed and are better examples of horrid ideas and fodder for cheap shots and jokes.

It would seem in the end that not everybody was happy with the flight when they disembarked along with Tegan at Heathrow, but I thought that although there were some bumps and even some nasty weather to fly through, the journey as a whole was actually quite smooth and enjoyable. I would definitely not say Time-Flight is as rich as the champagne and caviar you might get up in first class, but it also certainly was not as bad as the peanuts and warm cola that you might find find back in coach.