The world of Star Trek merchandise can be a strange one. If you’re like me – a fan of all science fiction, from Andromedia to Quantum Leap, Doctor Who to Red Dwarf, Star Wars to Star Trek – then you might recall Yogurt from Mel Brooks’ uproariously funny Star Wars spoof film Spaceballs when he said: “Merchandising! Merchandising! Where the real money… is made.”

Yogurt might have been a spoof version of Yoda, and hawking Spaceballs branded flamethrowers to children, but he has a point. When a television series or film gets popular, the merchandising deals are sure to follow.

This trend got out of control in the post-Star Wars days of the early eighties, and although some branded items have excellent real-world uses some merchandise for our beloved franchises – including Star Trek – should have been left in the cargo bay. Or better yet, blown out the nearest airlock…Here are five examples of strange, hilarious, and totally collectible goodies from the last 40 plus years of Star Trek merchandise…

Audio Review: Doctor Who- Legend of the Cybermen 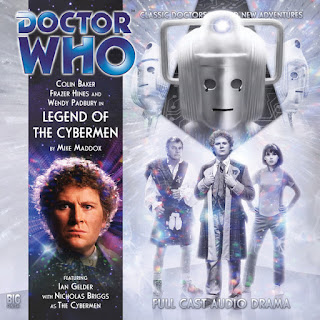 It is often said that truth is stranger than fiction and perhaps it is, but if we were weighing the weirdness factor of settings in Doctor Who, none would be stranger than the Land of Fiction, first introduced in the classic Patrick Troughton episode The Mind Robber in the television series sixth season. The Big Finish audio Legend of the Cybermen returns the Sixth Doctor and Jamie to the strange realm where they not only get reunited with an old friend in Zoe Harriet but also an old enemy in the Cybermen, who ended up in the Land of Fiction and are converting fictional characters to further the Cyber race. 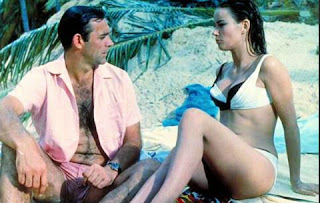 Thunderball is everything one would expect from classic James Bond as there are enough beautiful women, gadgets, and action for everyone. However, the film as it stands today is a bit drawn out and lacks the intensity of some other Bond films, such as Goldfinger or Dr. No.

While these points are certainly the heart and soul of any classic James Bond adventure there are holes in this particular boat which sometimes make it feel a but dead in the water.

The film was one of Sean Connery's favorite Bond films to work on as well as being a critical success, with Thunderball easily overtaking the worldwide cinema totals of the first two James Bond films.
Read more »
By tomspy77 - July 31, 2017 2 comments:

“Is America ready for a British James Bond?”

So spoke the wise and learned critic, Homer Simpson, at about the time that Daniel Craig was announced as the actor to replace Pierce Brosnan as Bond. Ironic post modern humor aside, this quote demonstrates the impact that Craig had on Bond fans when he donned the iconic tuxedo. Brosnan had been a popular choice for the role* and so the newcomer, then a relative unknown with naught but a few Guy Ritchie films under his belt, had a lot to live up to.
Read more »
By areteus - July 30, 2017 7 comments:

Baker Street Beat is an entertaining collection of short essays, stories and screenplays by Dan Andriacco, a self confessed Sherlock Holmes aficionado (he admits as much in his introduction so it hardly takes a Sherlockian level of genius to work this out) and covering the author’s own experiences and knowledge of the world of Holmes.

When faced with the term ‘essay’ one is put instantly in dread of dry, academic tracts with no inherent entertainment.

However, in this case the fear is unfounded.

One of the enduring mysteries of the Sherlock Holmes canon is how Dr. Watson came to become injured. Anyone who reads the original tales is aware that he was an army Doctor, that he served in Afghanistan* and that he took bullets from a jezail to the leg and shoulder.

The specifics of his service are not covered in any more detail than that, mainly because Watson’s narrative is focussed on the current exploits of Holmes rather than his own past.

The concept behind this book was therefore intriguing to me as, in whatever medium Holmes is seen, I have always had a soft spot for good old Doctor Watson and always wondered about the story behind his wounds. This book delivers that tale as Watson, following a mysterious visit from an old army buddy, is called upon to relate it to Holmes in order to explain some discrepancies noted in the previous telling.
Read more »
By areteus - July 27, 2017 No comments: