“Is America ready for a British James Bond?”

So spoke the wise and learned critic, Homer Simpson, at about the time that Daniel Craig was announced as the actor to replace Pierce Brosnan as Bond. Ironic post modern humor aside, this quote demonstrates the impact that Craig had on Bond fans when he donned the iconic tuxedo. Brosnan had been a popular choice for the role* and so the newcomer, then a relative unknown with naught but a few Guy Ritchie films under his belt, had a lot to live up to.

So, as with any film where an established role is played by an alternate actor, the crux of any review of Casino Royale must rest with whether or not Daniel Craig is better than Pierce Brosnan at being a charming, sociopathic thug in a Tux. On the whole, he succeeds by not trying to emulate Brosnan’s performance and instead of making the role his own. This is assisted by the director and the writers who together create a more modern interpretation of Bond. This version compares to previous versions in the same way that Christopher Nolan’s Batman Begins compares to Tim Burton’s version or even the 1960’s Burt Ward series.

Not every Bond fan will appreciate this. In the remodeling, some of the charms are lost and replaced with gritty realism. Fight scenes, for example, are choreographed to be clumsy and bloody rather than smooth and stylish and the consequences, both physical and mental, are clear to see in the scenes that follow. For example, a scene where Bond has just killed two men and is cleaning himself up is filled with little hints at the turmoil behind his usually stony facade. 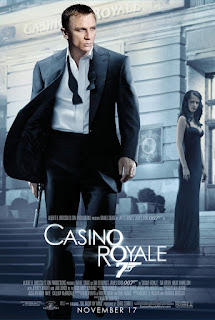 This is a Bond who is dour and moody with the classic quips always tainted with an underlying darkness which is in sharp contrast to Roger Moore’s efforts. The film also lacks a number of key Bond features. There is no Q, for example, and while there are gadgets aplenty I feel the film suffers somewhat from his lack. This is a minor issue, however, and many other essential Bond features are present such as the cars, the guns, the girls and the wonderful Judi Dench as M.

The plot of Casino Royale revolves around Le Chiffre, a gambler, and stockbroker who runs an illegal bank for terrorist organizations and using terrorist actions to play the stock market. When Bond foils one such terrorist action, Le Chiffre is forced to organize a high stakes poker game to recoup his losses before the terrorists come after him for their money.

The government places Bond into the game and things progress from there to a resolution with double crosses and a shock that compares favorably with the brutal ending of On Her Majesty’s Secret Service. The viewer gets all the stunts and action they expect from a Bond film along with an actually rather clever plot with lots of interesting characters.

In all, this is not a bad effort for a Bond film and, like Batman Begins, does bring the world’s most famous superspy up to date. Whether you appreciate Craig as Bond or not largely depends on how loyal you are to the previous incarnations. Bond fandom is always going to be divided on this issue and I don’t think this appointment will do anything to change that.

*The universally accepted standard for measuring any portrayal of Bond is their comparison with Sean Connery. Brosnan scored remarkably well on this, better than any other actor. In fact, in a poll of one father in law conducted by myself, 100% of those questioned stated that he was better than Connery. You cannot argue with statistics like that.
-Areteus