The world of Star Trek merchandise can be a strange one. If you’re like me – a fan of all science fiction, from Andromedia to Quantum Leap, Doctor Who to Red Dwarf, Star Wars to Star Trek – then you might recall Yogurt from Mel Brooks’ uproariously funny Star Wars spoof film Spaceballs when he said: “Merchandising! Merchandising! Where the real money… is made.”

Yogurt might have been a spoof version of Yoda, and hawking Spaceballs branded flamethrowers to children, but he has a point. When a television series or film gets popular, the merchandising deals are sure to follow.

This trend got out of control in the post-Star Wars days of the early eighties, and although some branded items have excellent real-world uses some merchandise for our beloved franchises – including Star Trek – should have been left in the cargo bay. Or better yet, blown out the nearest airlock…Here are five examples of strange, hilarious, and totally collectible goodies from the last 40 plus years of Star Trek merchandise… 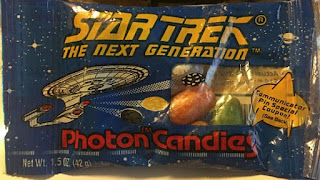 Now, this item is a literal treat…Made in 1992 by New Age Services, this extra long jelly bean-like candy was sold as a tie-in product during Star Trek The Next Generation‘s height of popularity, and by the picture on the front showing the U.S.S. Enterprise D firing the candies from its torpedo tubes, these were supposed to represent photon torpedos. Although placing real photon torpedos in your mouth (or even these 30-year-old candies) is inadvisable. 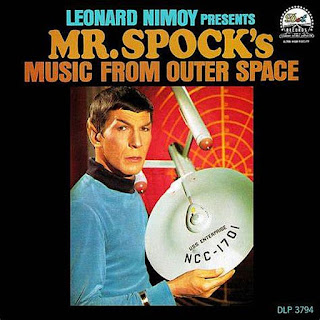 Ever since someone had the idea of live music accompanying early silent films, it seemed pre-ordained to have a long-lasting marriage with all forms of moving pictures. Today, that usually means a recording of the full score or incidental music of our favorite films and television series, or a compilation of licensed music from various artists featured in said property. Back in the sixties and seventies, they took a more liberal approach to branded music – particularly when it came to Star Trek merchandise.Enter Mr. Spock’s Music From Outer Space, which featured actor Leonard Nimoy performing – in character – as Spock over the course of 11 blistering tracks of Vulcan musical delights. Highlights include ‘Twinkle, Twinkle, Little Earth,’ ‘Beyond Antares,’ and ‘Music to Watch Space Girls By.’The album was released by Dot Records in 1967 which, at the time, was owned by Paramount Pictures, who also happened to own the producers of the original Star Trek series – Desilu Productions. The album spawned only one single – ‘A Visit to a Sad Planet’ – which actually made it to number 121 on the American Billboard music charts, probably as it contained the ‘Theme From Star Trek’ as a B-side.It should be noted that this album was later released in the UK on the Rediffusion label as Mr. Spock Presents Music From Space, but the only difference between that and the 1967 Dot Records release is the album’s cover, and some new liner notes. 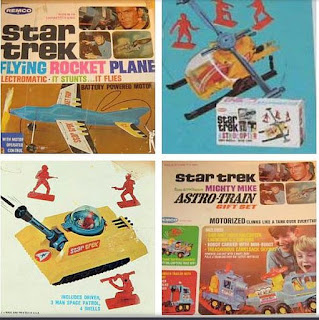 Another business practice of the sixties and seventies was to either make toys that had virtually nothing to do with the licensed property or to repurpose already existing toys into the license itself. This practice continues today, as action figures routinely reuse old sculpts and body parts on new figures, as well as the accessories that accompany them.Remco Toys – in its heyday – was another matter entirely, as they just slapped the name of the licensed property onto any old toy they already produced, and from 1967-1971 they got busy slapping the Star Trek logo – along with ‘astro’ – onto a helicopter, an airplane, a tank, and even a train.Although Remco did put out more Star Trek-orientated fare such as a toy phaser, a Star Trek utility belt, an Astro-buzz-ray-gun, and a Controlled Space Flight U.S.S. Enterprise – which was a fair-looking Enterprise model that went round like a carousel, operated by an air pump – most of the other toys in Remco’s Star Trek line were just rebranded toys that furthermore had nothing to do with Star Trek! 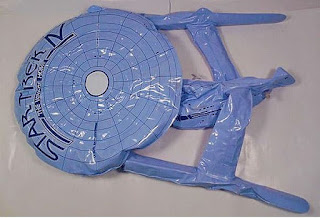 This piece of Star Trek merchandise has a nostalgic and personal connection, as I had one of these as a kid. So when I saw this picture in a social media post, I was thrilled. There seemed to be some debate from that source whether this was a commercially sold item or a special promotion for the movie.Although I, admittedly, did not scour the internet trying to find out what everyone else thought on this issue, I can personally confirm it was indeed a promo item to coincide with ‘The Voyage Home' video release in 1987.Having owned it, it is easy to see why I found it odd; it just hung there from strings attached to the nacelles, and the bridge dome in the middle of the saucer section – which is where it drooped, as it developed a leak and lost air – made it look more like a sad dog with its head down, rather than a Federation Starship.Still, I kept it for a while after it went flat. I would blow it up again and imagine it crashing, and the deflation was due to really strong gravity on the planet they were crashing on. I know, I had way too much indoor time as a kid… 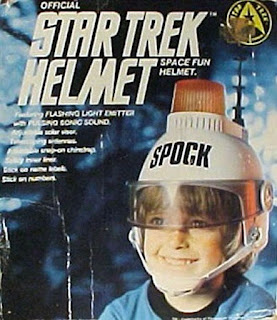 We must have the good folks at Remco Toys back for our final piece of Star Trek merchandise because as their story unfolded, they started to wonder if kids really wanted creativity, honesty, and perhaps even brand integrity in a product that bore the name Star Trek…

Remco found out the hard way, as the company went bankrupt in 1971. Its name, and the rights to produce Star Trek based toys, were sold to Azrak-Hamway International (or AHI) who, instead of learning from Remco’s failures, created possibly one of the worst Star Trek products ever – the official Star Trek Space Fun Helmet, or the Spock Helmet.It is something that you hoped your parents would never photograph you wearing, otherwise, you might suffer embarrassment as an adult – a toy that had no purpose but to look cool (or at least cool to a five-year-old, who did not mind strapping his head into a helmet with an antenna and light on top…)I also cannot stress that, like most of the Remco line, it had nothing to do with Star Trek!

Unless you really were into exploring strange new worlds… of fashion sense!Do you know of any other weird or even amazing pieces of Star Trek merchandise?

Do you still listen to your Mr. Spock record?

And did your parents snap you in the famous Fun Helmet?
Tell us in the comments below!